A screening series developed in partnership between seven international arts organisations, A River Waits Reply presents moving-image works from around the world as a poetic reply to this unprecedented year. It is a year that has invited new forms of exchange at a distance, and a long overdue reckoning with deep social and political inequities that call for new forms of solidarity. All seven institutions will simultaneously host each video on their websites for the duration of one week, with the series as a whole extending over seven weeks in total. Each work has been selected by a partner organisation as a response to the videos that preceded it, producing a cascading sequence and a winding river of thought, interpreted through the aesthetic and social values of their respective cultural context.

The title of the series comes from a poem by Emily Dickinson.

The story begins with an old couple, Atimaley and Devi, who live in a village in Jumla, in the highlands of Western Nepal. With the unannounced departure of a close friend, the only other person living in the village, they face the dilemma of staying and keeping the memories alive or leaving the village for good. The film is inspired by several stories.

Jumla is known for its tradition of ceremonial wooden masks, as well as for protective wooden effigies, known as ‘dadyaa’, which are made as offerings to local deities but sometimes as memories of ancestors. In recent years, numerous effigies made by a local sculptor have appeared around Jumla, on bridges, rooftops, ladders, and throughout the forest. Nepal is also heavily plagued by both internal and external migration, with many of its villages desolated and abandoned by young people. But the film is not meant to be an ethnographic survey, and as such it is also inspired by the story of a Japanese woman who made dolls to fill up her village as people died or left for the city, a major phenomenon in Japan as well.

Bibhusan Basnet (b.1987, Lalitpur) and Pooja Gurung (b.1983, Darjeeling) both live and work in Kathmandu.

This screening series comes at a time when the COVID-19 pandemic spreads fast across national borders and continents. It’s then no surprise that many of the works in the programme explore the darker forces underpinning an increased global interconnectivity. Beatriz Santiago Muñoz’s camera in Marche Salomon (selected by PIVÔ, São Paulo) captured the ironies of post-colonial conditions in the Caribbean; whereas the uncanny urban landscapes in David Hartt’s The Republic (presented by MOCA Toronto) connected the dots between Athens and Detroit, two cities whose irreversible decline is marked by capitalist failure.

Shot in the waters near Bantayan Island (Philippines), Martha Atienza’s hallucinatory video work Our Islands 11°16’58.4″N 123°45’07.0″E (2017) recreates a religious procession on the ocean floor. Wearing original costumes from local parades, a group of divers travels sluggishly across the damaged coral. The surreal entourage includes figures ranging from a climate refugee affected by Typhoon Yolanda to an infant Jesus, a boxing champion or a drug dealer followed by President Duterte’s anti-drug squad. The grey and barren ocean floor is testament to the enormous social, economic and environmental changes affecting the region. As the island’s ecosystem is increasingly under threat, its inhabitants are forced to abandon their homes and livelihoods to look for opportunities elsewhere.

Martha Atienza (b. 1981, Manila) is an artist based in Bantayan Island, Philippines. 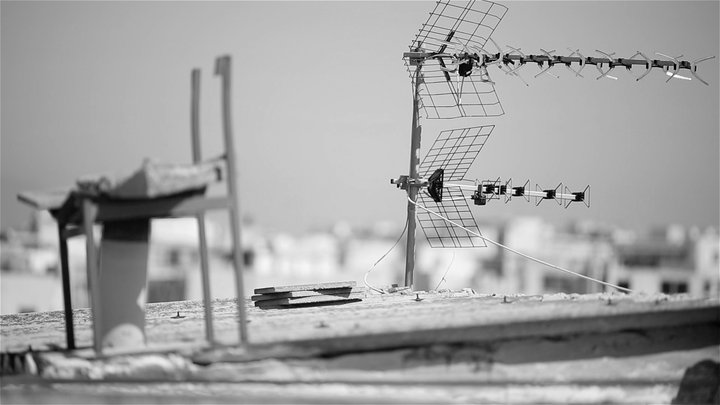 In the early 1960s, Constantinos Doxiadis was commissioned by the Greek military Junta to develop the master plan for Athens and to bring some order to the explosive post-war growth and urbanization the city was experiencing. In 1965, he was commissioned by Detroit Edison to lead the “Developing Urban Detroit Area Research Project.” The fall of the junta in 1974 and the Detroit riots of 1967 changed the historical trajectory of both cities and neither commission was realized. Hartt's ongoing inquiry into the ideological implications of the built environment engages a variety of media. Shot in both Athens and Detroit, the footage, set to a score by Sam Prekop, is montaged so that the locations become indiscernible and a hybrid city-state emerges. Interspersed at random moments throughout the film is a group of laborers who flip an automobile in a winter landscape as both an invocation of the myth of Sisyphus and a re-enactment of civil disorder.

David Hartt (b. 1967, Montreal) lives and works in Philadelphia. 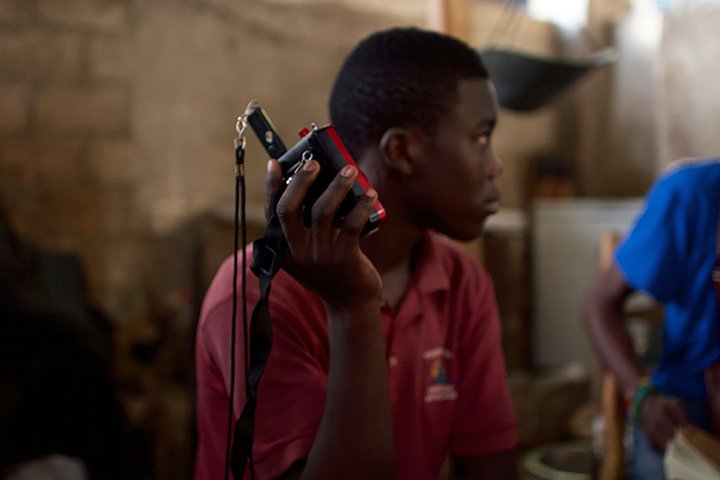 Marché Salomon follows the routine of two young workers in a busy Port-au-Prince open-air market, Marché Salomon. The youngsters embark on a conversation about the potential mystical properties of the products sold in the Haitian market while performing their daily tasks as meat vendors. The characters physically interact with objects in search of something else: “The only living things are the flies!”, One of them says at some point after waggling a goat’s head. We thought about this work in response to Miguel Calderón’s Camaleón because both films depart from specific characters to build social portraits revealing a particular context without recurring to stereotypes. Beatriz’s camera, like Miguel Calderón’s, moves slowly and deeply investigates their subjects’ surroundings and peripheral elements while we hear their stories and digressions. Both films are rich entanglements of places, personalities, history, and time. 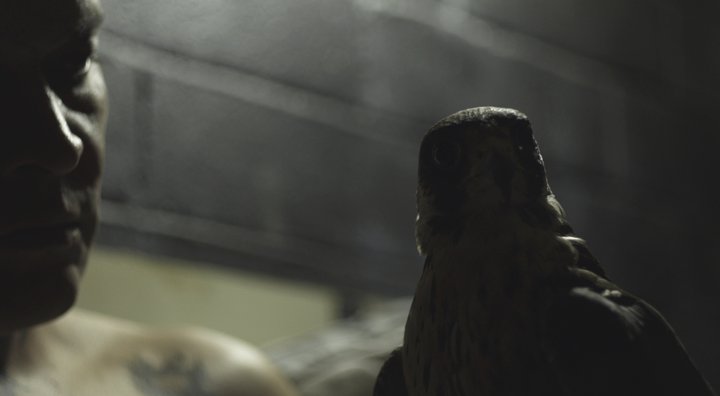 Miguel Calderón’s Camaleón (2017) responds to Ria Pacquée’s As long as I see birds flying I know I am alive. Calderón’s film stands as a social portrait documenting a male character’s captivating relationship to his female falcon. Camaleón’s voice-over leads us through his everyday life as he describes his night-job as a bouncer and his early outings with his bird; his erotic inclinations and his death drive as he committed his first murder. The film also stands as a poetic portrait of Mexico City’s night-life and as a poignant metaphor of the wave of violence the country has experienced over the last decades. 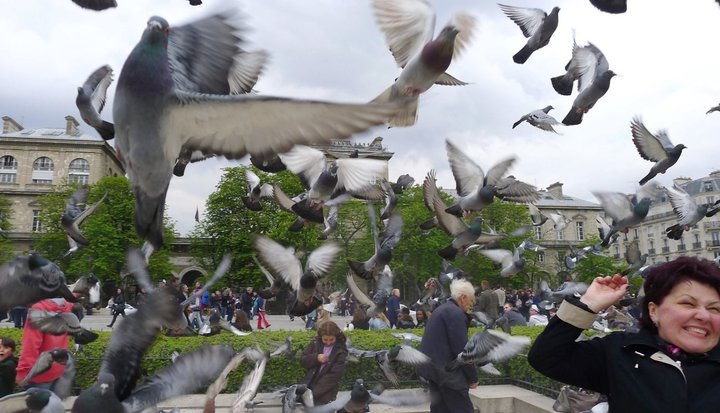 Watching Pauline Boudry and Renate Lorenz's powerful video, we were struck by its layered references to dissent, protest, and resistance. Its setting in public space is particularly notable in these times of domestic lockdown and isolation. Public space, with its implied openness and promise of dynamic interactions, has oftentimes been denied us in the past year. Yet despite these limitations, various forms of protest and collective gathering have occurred in the streets across the globe. Thinking about these sites has led us to a more poetic use of public space in the work of Ria Pacquée, a Belgian artist from the ARGOS collection, who explores public life as a dynamic construction through which identities are shaped.

In As long as I see birds flying I know I am alive, Pacquée assembles recordings predominantly made in public spaces in Paris, Kathmandu, Athens, Istanbul, Bruges, New York, Varanasi and Antwerp. By juxtaposing images of the sacred with those of a worldly nature, she undercuts the anthropological and scientific potential of her material – a disorienting strategy often used by the artist elsewhere. Two recurring elements, clouds of drifting smoke and prowling birds, evoke a dreamlike and looming atmosphere which makes even the most common gesture appear like being part of an age-old ritual, detaching these motifs from the geocultural realms they belong to.

Ria Pacquée (b. Belgium) is an Antwerp-based artist. 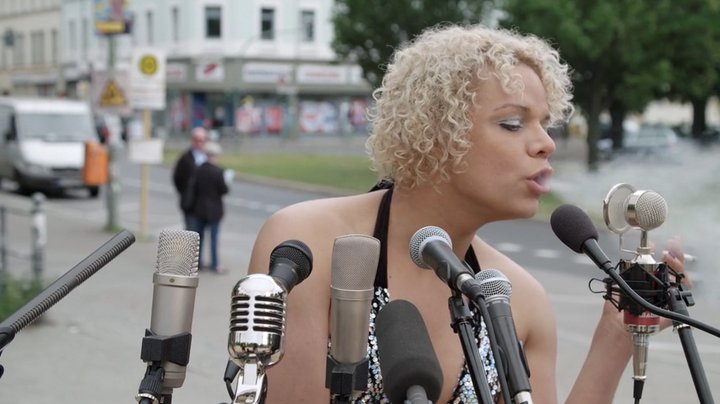 During this year of isolation our productive energy has been stifled, our motivation repressed by the pandemic, and simultaneously we’ve heard the call to protest, to voice our discontent, to demand justice. This tension drew us to Silent (2017) by Pauline Boudry and Renate Lorenz as it reflects silence as a form of protest, a denial-of-service as resistance, but also a suppression of the freedom to speak, the hand covering the mouth of the oppressed.

Musician Aérea Negrot’s rendition of John Cage’s iconic score 4’33” as she stands in front of a forest of microphones, as if for a press conference, amplifies the sense of anticipation and evokes silence as a form of civil disobedience in political arenas. The stage is set on Oranienplatz in Berlin, where a refugee protest camp took place between 2012 and 2014.

This performance is followed by a song composed for the film. In both we recognise an urge to challenge the normalisation apparent in unspoken (but deeply felt) forms of bias and bigotry. The artists are seeking the point of contact between the defiant act of silence, and the act of breaking the silence, as representative of emergent forms of political dissent, but also the power of vulnerability and unapologetic desire.

Pauline Boudry (b. Switzerland) and Renate Lorenz (b. Germany) have worked together since 2007. They live and work in Berlin.