Comprising newly commissioned video, sculpture, print, and text-based works, the exhibition focuses on French writer Rachilde’s Monsieur Venus: A Materialist Novel. Exploring what is at stake in historical reclamation, Female Executioner investigates what happens when a queer, transfeminine artist tries to touch, reflect on, or rehabilitate a historical work of fiction which seems to offer them ancestry.

First published in Belgium in 1884, Monsieur Venus describes a relationship between Raoule de Vénérande, a masculine aristocratic woman, and Jacques Silvert, a working class boy who becomes her mistress. Together, aided by Jacque’s sister Marie and Raoule’s friend the Baron de Raittolbe, the couple invert their genders, acting out a love fuelled by perverse innovation and tinged with sexual jealousy, conservatism and class power. In the end, however, the novel’s overarching Victorian morality falls upon its characters, and everyone is punished for their transgressions.

For Jamie, the novel’s frequent and nuanced cruelty complicates any wholly positive identification with the lead characters, who may at first seem like prototypes of modern-day transgender figuration. However, aspects of the novel still speak lucidly to contemporary trans experience, touching on issues that remain urgent, such as fraught relations with visibility and authenticity, pervasive experiences of trauma, and the threat of punishment and harm. Grappling with this painful ambivalence, Female Executioner stages, reworks and misreads the positive and negative, radical and moralising aspects of Monsieur Venus in relation the artist’s own personal history and experience of transness. In Jamie’s own words, “seething under its own references” the exhibition “tries to touch the past, and is struck by the past in response.”

The video Adulteress stages the moment that Jacques slips away from Raoule to walk the streets in a black velvet dress and attempt to seduce a ‘real man’. Chronology, setting and performance are unhinged from Rachilde’s original description, which appears at the bottom of the screen, as focus is given to Jacques’s excited journey instead of Raoule’s jealous rage. Rachilde's text juxtaposes with and contradicts the footage it accompanies, building to an ending in which tentative and optimistic images synchronise with the promise of a duel to the death. Through these and other strategies of wilful misinterpretation — as well as impartial editing, working together with close friends and displacing the novel’s events to modern-day Glasgow — the radical potential and fundamental judgements of Monsieur Venus are made to trouble a new context.

Commissioned by Gasworks through the Freelands Gasworks Partnership. With thanks to Transmission Gallery, Glasgow. Exhibitions supporter 2016-17: Catherine Petitgas.

Jamie Crewe lives and works in Glasgow. In February 2016 they opened their first solo show, But what was most awful was a girl who was singing, at Transmission, Glasgow; recent group exhibitions include Enough Romance, Let's Fuck, Gabriele Senn Galerie, Vienna, (2016); Like a Floral Knife, Embassy Gallery, Edinburgh (2016); and A Camel is a Horse, Transmission, Glasgow (2016). In 2015 Jamie graduated from the Master of Fine Art course at Glasgow School of Art, and received a special commendation from Glasgow Sculpture Studios. 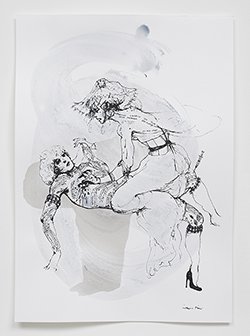 Potash takes spironolactone is hand finished with a woad wash by the artist and is currently available in Gasworks shop.

Artist and singer Jamie Crewe uses objects, moving image, print, installation and publication to make diverse works which inform each other. These often stage confrontations between disparate references: between filmmaker James Bidgood and the myth … More

Potash Lesson is a performance by Jamie Crewe, first presented at Tramway Artists’ Moving Image Festival 2016. Seated, with a microphone and a projected computer screen, Jamie will think about an old video work from … More

As part of Cinenova’s Now Showing series, Jamie Crewe presents a moving image work from Cinenova’s collection alongside a work of their own. More