Unravelling the relationships between personal and collective histories, amnesia and the archive, Wa Lehulere’s practice explores how South Africa’s past continues to haunt the present. Inspired by theatre and set design, his drawings, performances and sculptures are often conceived as ‘rehearsals’, framed by longer-term research projects about motifs such as the act of falling or the unfaithfulness of language. In recent years, Wa Lehulere has also worked as part of the collectives Gugulective (2006–ongoing) and the Center for Historical Reenactments (2010–ongoing).

Processes of revision and juxtaposition — of past lives, ideas and forms — underpin Wa Lehulere’s show at Gasworks.

Processes of revision and juxtaposition — of past lives, ideas and forms — underpin Wa Lehulere’s show at Gasworks. The exhibition takes as its starting point South African intellectual Sol Plaatje’s journeys to England in the early twentieth century to petition against the 1913 Natives Land Act that helped lay the groundwork for apartheid. This is combined with research into American playwright Richard Walton Tulley’s (1877-1945) forgotten play The Bird of Paradise (1912), set in 1890s Hawaii, and postage stamps from countries that no longer exist. Including new chalk-on-blackboard drawings, wall etchings and soil and grass sculptures, which the artist refers to as 'living sculptures', among other works, the exhibition stages a speculative encounter between Plaatje’s past and its interpretation by the artist in the present.

Overlooked historical figures, including the works they produced and the objects they kept, often resurface anachronistically as characters or props across different iterations of Wa Lehulere’s work. The recent series of chalk-on-blackboard drawings Does this mirror have a memory (2015), for example, made in collaboration with his aunt, document her attempts to recall the mural paintings that once covered the walls and ceilings of South African artist Gladys Mgudlandlu’s house in Gugulethu, Cape Town, where Wa Lehulere grew up. These works, combined with the accompanying short documentary ‘Homeless Song’ (2015), simultaneously imagine and detail in part the excavation of these paintings from beneath nine layers of household paint and plaster.

Other recent sculptures, such as reddening of the greens or dog sleep manifesto (2015), combine vintage leather suitcases, mass-produced ceramic dogs, blackboards and wood from salvaged school desks with grass growing from earth taken from the grave of the exiled South African writer and journalist Nat Nakasa in upstate New York in 2013, more than a year before the South African government announced that his remains were to be repatriated. These were recently shown alongside the falling event (2014-15) series of ink-on-paper drawings about “forms of falling”, which evoke Japanese artist Mieko Shiomi’s (b. 1938) instruction piece ‘Spatial Poem No. 3’ (Falling Event, 1966). Together these works present the act of falling as a form and concept that unites Shiomi with Nakasa, both contriving a new history and memorialising the latter’s death, to which he fell.

Kemang Wa Lehulere was born in 1984 in Cape Town, where he lives and works. Recent solo exhibitions include Lombard Freid Projects, New York (2013); Stevenson, Johannesburg (2015 and 2012); the Goethe-Institut, Johannesburg (2011) and the Association of Visual Arts in Cape Town (2009). Group shows include the Edinburgh Art Festival (2015); the 8th Berlin Biennale (2014); Public Intimacy: Art and Social Life in South Africa at the Yerba Buena Center for the Arts, San Francisco (2014); The Ungovernables, the 2nd New Museum triennial in New York (2012); and A Terrible Beauty is Born, the 11th Biennale de Lyon at the Museum of Contemporary Art, Lyon, France (2011). Wa Lehulere was a co-founder, in 2006, of Gugulective, an artist-led collective based in Cape Town, and is a founding member of the Center for Historical Reenactments in Johannesburg (2010–ongoing). He was jointly awarded the 15th Baloise Art Prize at Art Basel in 2013 and recently won the 2015 Standard Bank South Africa, Young Artist Award.

* Gugulective was an artist-led collective founded in 2006 in Gugulethu, a township near Cape Town, South Africa.
--

Kemang Wa Lehulere has produced a photo polymer relief print exclusively for Gasworks. My apologies to time, again, 2017 is a limited edition of 30 signed and numbered prints, available from our shop. 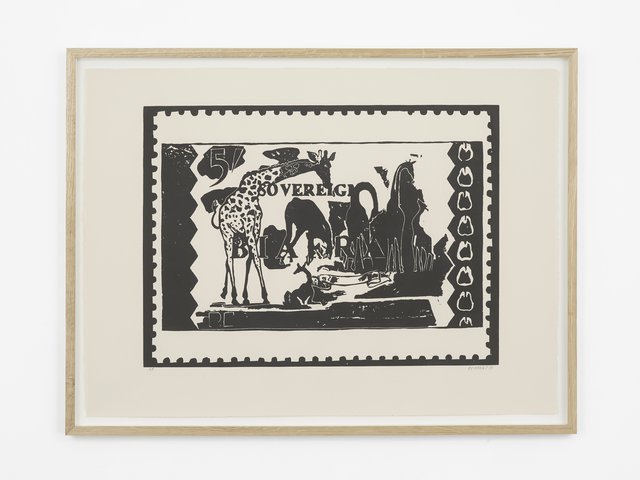 Following Kemang Wa Lehulere's first UK solo exhibition at Gasworks there are a number of opportunities to hear the artist discuss his work around London throughout the month of October. Friday 16 October 2015, 3.30pm … More