Katie Numi Usher works across performance, sculpture, painting and embroidery to explore blackness and interrogate black female erasure within both the colonial history of Belize and the present day.

She is particularly interested in the lack of visibility of black women within art history and uses her work to challenge the cultural institutions of Belize to address this imbalance. Usher regularly uses online social media platforms as virtual galleries, challenging the gatekeeping of traditional museum and gallery spaces and providing a space and a platform for other Belizean creatives to connect with both their community and the wider black diaspora.

Tune in to hear Katie in conversation with artist Joy Gregory on Sunday 20 March, 12pm (UK) via Instagram live, organised in partnership with  Tropical Papers.

On the occasion of her open studio, Katie has written a text outlining the research that she has undertaken during her residency:

"During my residency at Gasworks, I have responded to the location (the London Borough of Lambeth) where both the residency house and Gasworks are located.

This area was home to two key figures:

Captain William Bligh (appointed by Sir Joseph Banks, botanist, former director of Kew Gardens and advocate of the Slave Trade, to bring breadfruit from Tahiti to the Caribbean) because it was considered by Banks to be 'cheap and nutritious food, for Enslaved Africans on British-owned sugar plantations.'

Lambeth was also home to Henry Tate, ESQ. J.P. 1st Baronet, a philanthropist, a donor to the arts, education, religious instruction and health. He donated resources for four free libraries as well as the art and resources for the former Millbank Prison to be converted to the National Gallery for British Art, now called Tate Britain. 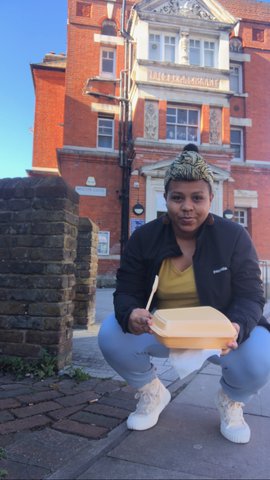 I am currently making a video-performance series called Eating Sugar in front of Henry Tate, in front of the Libraries and eventually Tate Britain. His name, and/or his likeness, is/are usually in frame in the background. 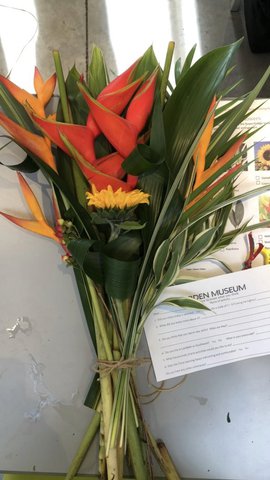 I am also looking at fruit, blossoms, flowers and plants which are indirectly or directly connected to sugar plantations and this borough: breadfruit, sugarcane and plantains. Noteworthy: The Tradescants also lived in Lambeth, and are said to have travelled to the Americas and 'three of the four known continents and the collection they made was a world of wonders in one closet shut.' For plants, and after whom, some plants are named.

My initial proposal required research at, among other places, the British Library and the National Archive, possibly. After a not-so-nice encounter at the British Library, and correspondence of a similar nature, my approach to my proposal changed. The correspondence was printed and framed in Poundland gold colour frames, these will mirror four 26cm embroideries of affirmations.

These are affirmations which I felt that I needed to be told after that encounter and any similar encounter with bureaucratic scenarios, micro-aggressions and navigating within a misogynistic world while a woman and Black.

The embroideries are on thin black viscose material and are embroidered with gold metallic thread which are 100% polyester. Both materials are heavily chemicalised versions of their original plant source. The chemical nature makes polyester more resistant to damage than cotton but viscose less so, according to what I have read online. 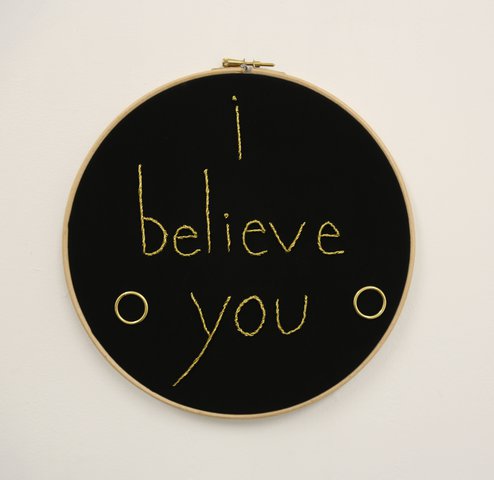 Each embroidered piece has two small gold rings attached to recall the gold hoops earrings which are both commonplace in Black women’s accessories and fashions as well as widely appropriated as Gen Z fashion, which seems to me visually nostalgic of 80s and 90s African American pop, hip hop and RnB artists. The technique (embroidery) commonly understood as craft and/or women’s work, as well as the material (the colours black and gold) are very important to mirror and deflect the white printed letter correspondence in the cheap, rigid, rectangular gold frames.

Belize has two major exports (income earners) sugarcane cultivation (and which it exports to predominantly the UK) and tourism. Both industries are very fragile, as we saw with the coronavirus pandemic of 2020, which Belize’s economy is still trying to recuperate from, and extensions of colonial workings in a supposedly postcolonial space. I am also exploring these with the video-performance but also with sketches, which I am expanding unto a metre of calico fabric and embroidering with different shades of green 100% cotton and colourfast embroidery thread.

Lastly, I have asked the Gasworks to purchase a DNA test to get an understanding of my history. It was unavoidable the reflection of being in London, the former colonial office, the headquarters from which my country was governed for three hundred and forty nine years, and where majority of our archives are still held, (also some are located in Jamaica, as Belize was run as a dependency of Jamaica for many years when both countries were British colonies).

The death and burial of my paternal grandmother in Belize during the time of the residency and being unable to access neither the British Library nor the National Archive because I do not have a valid, and acceptable to both institutions, proof of address have all led me to request the test to gather information on my heritage.

Obviously the effects of colonialism and enslavement have long standing effects on countries and racialised people globally. A most basic thing like a family tree, and thus knowing one’s heritage, can and do have many ambiguous branches as a legacy of this. I am exploring this and believe that the video-performance series, sketches, embroideries and DNA test are all connected and how I am responding to residency and attempting at getting closer to my original proposal, which was: what would the Art world look like if it centred as opposed to invisibilized Black women. To even attempt that particular undertaking, it has become crystal clear to me that because of coloniality, under which we all still operate, I would have to do a radical action.

To quote Angela Davis “radical means simply grasping things at the root” because as Audre Lorde rightfully said, “the master’s tools will never dismantle the master’s house” and this was the experience I had at the British Library. That for me to even access their archives, there was a lot of gatekeeping -called procedure- that I would have to navigate."

Katie Numi Usher’s residency is supported by The Shelagh Wakely Bequest, administered by The Elephant Trust.

Shelagh Wakely (1932 – 2011), was a British artist whose experimental practice combined visual art, sculpture and design with architecture. Wakely travelled widely in South-America, with special interest in Brazil, and her residence in London became a meeting point for Brazilian and Latin American artists.

The Elephant Trust administers the Shelagh Wakely Bequest, and the Shelagh Wakely Residency has been created in partnership with Gasworks to provide an emerging artist from Latin-America with a three-month residency opportunity in London.

Katie's residency also includes a virtual component developed in partnership with Tropical Papers, a platform that disseminates ideas and practices from artists working in, and with, the Tropics.